Ballycastle has existed for centuries and in the past it was known as Somhairle Buidhe (Sorley Boy) MacDonnell’s town. Sorley Boy was born in 1505 in Dunanyie fortress at what is now known as Castle Point. Sorley Boy’s father Alexander MacDonnell, descendant of King John of the Isles, with his wife Catherine MacIan reigned over Dunyveg and the Antrim Glynns as Lord until he died peacefully in Dunanyie fortress. Sorley Boy was not an only child, infact there where possibly five other brothers James, Angus, Colla, Alexander, Donnell Gorme and at least three sisters. James as the eldest son inherited in 1546 the title of ‘Lord of Dunyveg and Antrim Glynns’ but decided to return to his native Scottish Isles accompanied by his wife Agnus Campbell leaving Colla ruling in his absence. Colla had married Eveleen MacQuillan keeping the previous rulers the MacQuillans at peace for the present, he also had two sons Gillaspick and Randal.

In 1551 the Clandonnell banner dominated over the Route and Glynns of Antrim, the government saw the Scots in Ireland as a political threat and attempted to halt the expansion by arresting Sorley Boy and placing him in Dublin Castle. The government also sent James Croft with four ships to the North Channel to land on Rathlin Island and capture Colla MacDonnell, unfortunately Colla captured Bagenall and Cuffe from the invasion force and ransomed them for the release of his brother Sorley Boy. Defeated and desperately seeking compensation for the loses he had sustained Croft then turned to Kinbane Castle which he blasted with canon leaving it indefensible. Colla returned and must have repaired the remains as he lived at Kinbane until his death in 1558.

James then handed the Lordship over to Sorley Boy and when Gillaspick son of Colla came of age Sorley Boy decided to mark the occasion by ordering a celebration of Public Games in Ballycastle. Amongst the events was bull-fighting that Gillaspick tried and unfortunately the animal got the better killing him before his staff could distract the bull. Sean O’Neill had been strongly coerced into feuding with the MacDonnells by the English Queen Elizabeth who felt threatened by, and hated both of them, and sought to save money by having them fight each other.

In 1565 after a fierce battle Angus MacDonnell was slain and James & Sorely Boy MacDonnell were captured by Sean O’Neill. Sean O’Neill demanded a ransom for the release of James whom he had placed in the dungeons of Dunluce Castle at one stage, unfortunately for O’Neill James died from a festering battle wound before the ransom could be paid. James’s death was very much lamented as he was a man distinguished for hospitality, feats of arms, liberality, conviviality, generosity, and bestowing of gifts, and there was not his equal amongst the Clan Donald at that time in Ireland or Scotland. 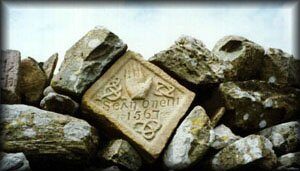 Later, after inter Gaelic feuds O’Neill sought protection among the MacDonnells who seized their opportunity, near Cushendun, for revenge and shredded his body with daggers on the 2nd June 1567. A cairn is mounted in a wall just north of Cushendun, where Sean O’Neill met his end.

In 1575 Elizabeth I sent Essex to invade Antrim and Essex sent Norris to invade Rathlin island murdering women, children, the wounded, sick, old, and many pledges. Most men seeing their loved ones murdered as he watched helplessly from the mainland would have despaired, but Sorley Boy fought back and by 1584 he was once again master of Antrim. In 1586 the English settled their differences with Sorley Boy now aged eighty-one and so he lived in peace before dying four years later at Dunanyie finally being buried at Bonamargy Friary beside his brother James. In 1620, Sorley Boy’s son Randal MacDonnell was made Earl of Antrim. The Earldom of Antrim has remained in MacDonnell hands ever since.